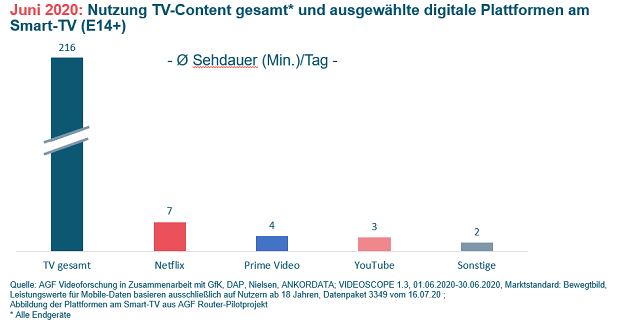 Frankfurt, July 23, 2020. AGF Videoforschung is expanding its measurement with its “AGF Smart Meter” project: Using measurement router technology developed by GfK on behalf of AGF, AGF is measuring the use of streaming services on smart TVs in its own panel. This way, the average daily watch times of selected video platforms such as Netflix and Amazon Prime Video on big screens can be determined. A future monthly report based on this measurement will show the usage times for seven target groups, initially. Additional target groups, video offers and devices will be added later. The measurement routers are already delivering data from around 590 AGF Panel households with more than 1,200 persons on a regular basis.

“By integrating measurement routers in the traditional AGF Panel households, we will successively close further measurement gaps and consistently expand our single-source approach in our own panel. This is a trendsetting project with which we are addressing the increasingly more differentiated video usage,” said Kerstin Niederauer-Kopf, CEO of AGF Videoforschung.

The data published today can be described as a first shoulder check. In this project phase, AGF is reporting aggregated data on the use of selected streaming services on Internet-connected TV sets. “Our report provides a first validated overview of the degree to which streaming services are already being used on TV sets. Series and movies of Netflix and other services are often used as an alternative to linear TV programming and are competing for space on the biggest and most effective screen in the household. With this complementary measurement, we provide a higher-level perspective of how large the video universe has already become,” said Niederauer-Kopf.

In the first report for the month of June 2020 available now, Netflix reached an average daily watch time of 7 minutes on smart TVs among viewers aged 14 and older. Amazon’s streaming service Prime Video was watched on TV sets for a daily average of 4 minutes, YouTube for 3 minutes. By comparison, this target group’s average usage of TV content (linear and non-linear) across all terminal devices in June was 216 minutes per day. “Thus, traditional TV content accounts for the greatest share of use by far,” said Kerstin Niederauer-Kopf. AGF also wants to measure the use of streaming services on other Internet-capable terminal devices in the future.

AGF Smart Meter also makes it possible to compare different target groups. In an exemplary analysis, AGF has reported the average watch time for seven common target groups. Viewers aged 14 to 29 spend the most time, an average of 12 minutes per day, watching Netflix on TV sets.

The report also shows differences in the usage of streaming services on smart TVs: YouTube, for example, is used to a lesser extent on the big screen than Netflix. “The measurement therefore confirms the results that we see in prestigious external studies and our own survey studies, such as the AGF platform study and the recently published AGF GenZ video study,” Niederauer-Kopf said.

The streaming services are measured on the basis of specialized measurement routers connected to smart TV sets that are currently installed in around 590 households of the AGF Panel. In these households, the usage on smart TVs of every person living in the household can be measured on the basis of the standard remote control registration. This is a crucial difference from purely device-based measurement approaches that do not provide information about the persons using the devices. By the end of the year, AGF’s service provider GfK intends to equip around 1,000 households with the supplementary measurement technology, which should make it possible to also measure all other devices of the household members, including use on smartphones and tables, for instance.

Unlike other studies that question people about their use of Netflix and other streaming services, AGF conducts an independent measurement. Survey studies like the AGF platform study always serve the purpose of additional validation and supplementation.

2. Measurement of smart TVs – Data collected on the level of individuals

Similar to data on linear TV use in the AGF Panel, the router data is collected on the level of households and individuals because the panel members log on and off individually. With this project, AGF is developing and expanding the single-source core in its own panel. The important overlap information resulting from this approach is also needed for additional convergence projects such as cross-platform campaign measurement.

“We will therefore have demographic information that is so very important to the market for being able to draw reliable conclusions about the video usage of different target groups. Such information is essential for programming directors and advertisers and has previously not been available in the market on this basis,” Kerstin Niederauer-Kopf said.

AGF Smart Meter works with passive measurement. This means that the measurement requires no action on the part of streaming providers. “Consequently, the AGF Smart Meter provides a broad, useful overview of the relevance and performance of single services in the German streaming market,” Niederauer-Kopf said.

AGF Smart Meter can therefore be understood as a measurement project that complements the already established AGF streaming measurement with Nielsen. The latter measurement requires the active cooperation of streaming providers, including the integration of Nielsen’s measurement software. This measurement delivers fine-grained data on the use of specific content such as information programs, (live) sports, series and movies, but also advertising. This data is used for other important projects involving the connection to TV, in the spirit of the motto “follow the content.”

INITIAL FINDINGS
The most-used streaming platform on smart TVs in June 2020 was Netflix, followed by Amazon Prime Video and YouTube.

AGF Videoforschung plans to provide future reports on a monthly basis. It will focus on quality assurance and validation in the near term.

AGF is placing a high priority on the AGF Smart Meter project, with a particular emphasis on two aspects. First, AGF will continually expand the single-source core and also connect other data sources. Second, the technology used offers the added benefit of being able to completely track in-home video use on different devices. However, the panelists’ consent to this measurement is a fundamental prerequisite. “We therefore want to continually expand the scope of measurement in the AGF Panel households considerably in the coming years. Given the dynamic evolution of the video market, this is a logical and necessary consequence,” Kerstin Niederauer-Kopf said.

AGF Videoforschung GmbH specializes in impartial video research. AGF continuously tracks the use of video content in Germany on a quantitative basis and analyzes the collected data. It invests many millions of euros per year to continuously refine its instruments in order to deliver reliable data on the use of video content to the market on a daily basis. AGF consults closely with all market partners, including licensed TV stations, advertisers and media agencies.