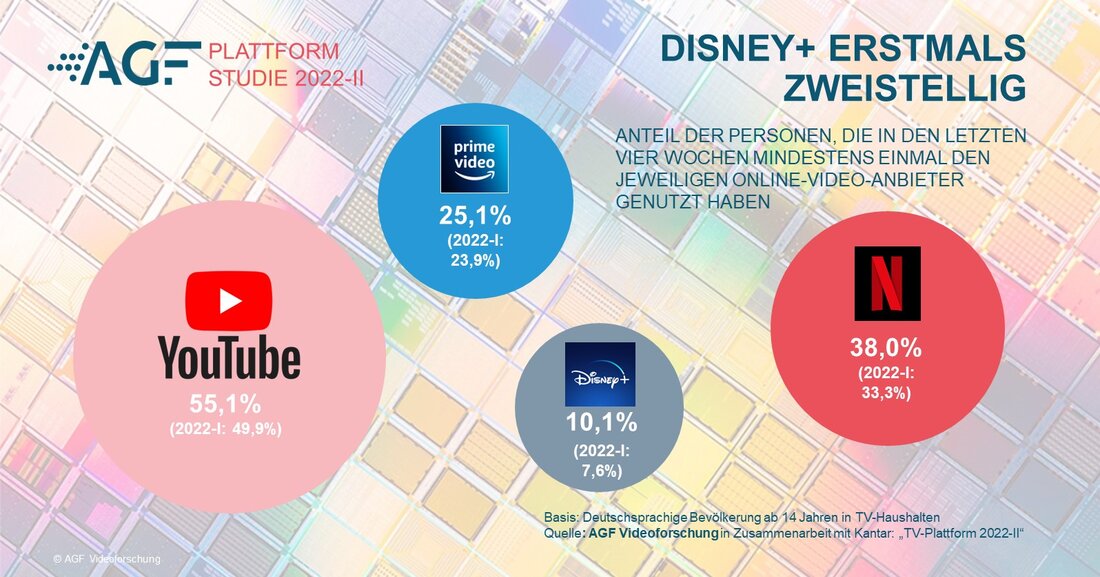 Frankfurt, 14/12/2022. Connected TVs are also being used more and more frequently for streaming. Already 56.2 percent of the German-speaking population aged 14 and older in TV households say they have been online with the TV at least once in the past four weeks. This is one of the results of the current platform study, which Kantar conducts twice a year on behalf of AGF Videoforschung. In spring, the figure was 52.0 percent, a year ago only 48.9 percent. "With the increasing penetration of smart devices in households, the technological possibilities offered by internet-capable TV sets are also being used more intensively. The big screen has not lost its relevance. On the contrary,” says Kerstin Niederauer-Kopf, CEO of AGF Videoforschung in Frankfurt.

Almost two thirds of people now use three or more devices to be online (63.7 percent). Two devices are used by 17.6 percent of the people, only one by 7.9 percent of the respondents. Smartphones are in first place, followed by PCs and laptops and smart TV devices, which have already overtaken tablets in 2020.

In the platform study, for which Kantar surveys around 2,500 people aged 14 years and over per wave, the AGF also examines the spread of TVs. The average number of TV sets per household remained constant during the survey period at 1.4 TV sets. The proportion of 4K or Ultra HD sets in households is currently 29.9 percent. This means that there was no further increase compared to the previous wave (2022-I: 32.7 percent). "One reason for this could be an inflation-driven reluctance to buy, which can currently also be observed in other areas," says Niederauer-Kopf.

Streaming services, on the other hand, can look forward to a further increase in usage. The online services of the TV channels were watched by 34.6 percent of respondents aged 14 and older in the last four weeks (2022-I: 33.6 percent). The offerings of the public channels and Joyn are at about the same level as in the previous wave, RTL+ was able to record an increase to 7.1 percent (2022-I: 6.0 percent).

Independent streaming services were increasingly used and reached a new all-time high of 66.7 percent among 14+ year olds (2022-I: 62.0 per cent). Almost all major platforms contributed to the growth: Youtube was able to make up for the significant losses from the last wave with an increase to 55.1 percent. Netflix grew noticeably to 38.0 percent (2022-I: 33.3 percent) and Prime Video from 23.9 percent to 25.1 percent. Disney+ exceeds the 10 percent mark for the first time with 10.1 percent (2022-I: 7.6 percent).

Disney+ scores particularly well with 14-29 year olds, whose offer includes not only classics such as "The Jungle Book" and "The Ice Queen", but also feature films from the Marvel universe such as the “Avangers” series. The proportion of those who say they have used Disney+ in the last four weeks has risen from 15.5 percent to 24.7 percent.

Overall, the usage of paid video-on-demand services among 14+ year olds also reached a new high: almost one in two said they had used such a service in the past four weeks - an increase of almost 5 percentage points (2022-II: 48.4 percent; 2022-I: 43.5 percent).

On smart TVs, media libraries and video-on-demand services are accessed in different ways depending on age: while 53.0 percent of 14- to 29-year-olds prefer to call up the internet menu with tiles or apps, over-65s prefer to press the Red button on the remote control to get to the online offer (68.7 percent).

While video streaming continues to rise, the share of pay-TV households is declining slightly. 11.5 percent said they had a subscription. In the spring wave, it was still 12.2 percent.

Name of the study:     TV-Platform

Methodological adjustment in the TV platform study: Since wave 2021-II, the platform study has been weighted to the AGF video potential, which since 01.01.2022 has also served as an external target for the entire AGF system and into which - in addition to the survey data from the potential study in cooperation with agof and ag.ma - information from the platform study is also incorporated. The platform study is conducted using an elaborate methodology in which the interviewers also visit the households and can thus obtain precise information on which pay-TV providers and which streaming services are used.