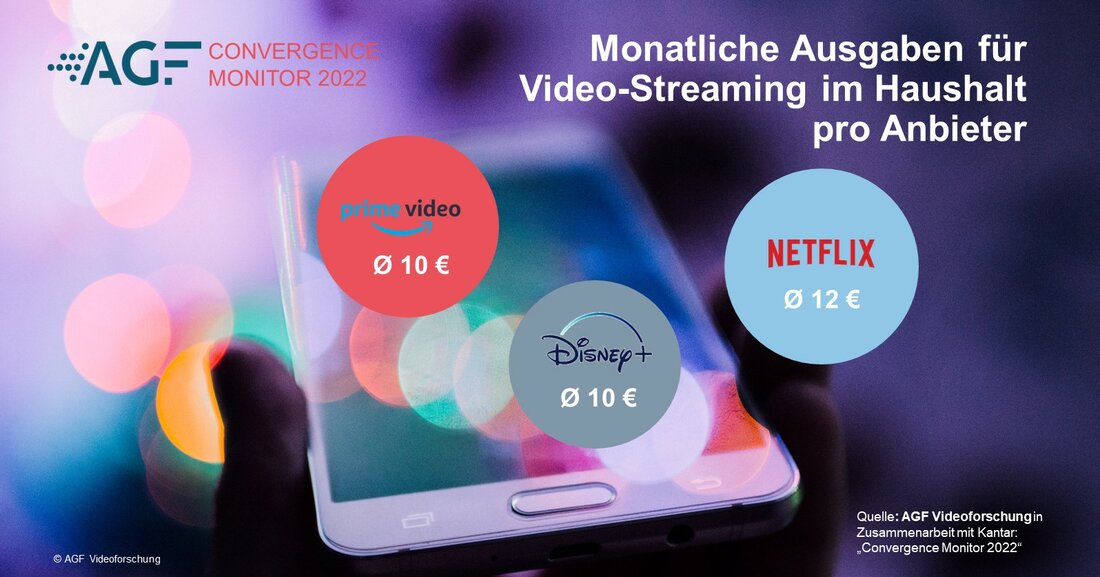 Frankfurt, 13/09/2022. German households spend an average of EUR 22 per month on streaming services. And 15.6 percent of German households with at least one streaming subscription spend more than EUR 30 per month. The average amount paid for Netflix is EUR 12 and for Prime Video it is EUR 10, which is the same amount paid on average for Disney+. These are among the findings of the study CONVERGENCE MONITOR 2022, which Kantar will present at the AGF Forum on Thursday of this week. The largest group of households, 27.3 percent, spend between EUR 11 and EUR 20 per month, while 22.7 percent spend EUR 6 to EUR 10.

The basis for the CONVERGENCE MONITOR, which Kantar has conducted on behalf of AGF since 2020, is the total German-speaking resident population aged 14 to 69 or households with at least one person in this age group in Germany. In total, the market researchers conducted around 1,500 face-to-face interviews from 31 March to 15 May of this year to find out how devices, media services, and communication services, as well as the content of each service, are being used.

According to the latest study findings, video use continues to grow: 76.0 percent of respondents reported that they consume video online at least once per month. Users who consume video-on-demand services remained constant at 29.9 percent (2021: 29.9 percent), while those who consume free movies, TV shows, and documentaries came to 25.9 percent (2021: 26.6 percent). However, the percentage of users who watch movies, TV series, and documentaries on paid streaming services has grown substantially, reaching 38.0 percent after only 33.9 percent in the previous year. “This uplift is a reflection of the growing number of VoD platforms, the greater attractiveness of the different services, and the continued relevance of big TV screens as the primary medium for video usage,” said Kerstin Niederauer-Kopf, CEO of AGF Videoforschung.

Another technological innovation is becoming more and more popular: the high-resolution standard 4K/8K/Ultra HD: One out of every three households can now view TV and streaming content in this level of quality (32.2 percent, 2021: 29.0 percent). Moreover, HD usage varies by private-sector vs. public-sector broadcasters: Whereas 81.0 percent of respondents report watching ARD and ZDF in HD quality (2021: 78.6 percent), only 43.8 percent watch private-sector TV stations in this standard (2021: 41.3 percent). “This difference is likely attributable to the different distribution strategies,” Niederauer-Kopf said.

News and TV shows are uniquely popular on linear TV

But which kind of content is especially popular? Kantar took a detailed look at the popularity of the different genres. Movies are the first choice everywhere, whether linear TV, the video-on-demand services of the TV stations, or streaming services like Netflix. However, clear differences can be seen in the respective levels: 62.9 percent report a clear preference for movies on linear TV, while roughly the same percentage, 61.8 percent, have the same preference for movies on the TV stations’ video-on-demand platforms. But this preference is even more pronounced on the streaming services, at 83.4 percent, while TV series rank second, at 67.4 percent of respondents. TV series are also popular on video-on-demand platforms and TV (42.7 percent vs. 38.2 percent). When it comes to TV, however, news comes in second place, at 58.9 percent, ahead of TV series. Thus, news content is uniquely popular on linear TV, along with TV shows, which are (still) much less popular on the streaming services, whereas documentaries and sports have since risen to be among the top-5 most favorite genres on streaming services.

Instant messaging and social media on the rise

Although the level of TikTok usage remains far below that of more established services like WhatsApp, Facebook, and Instagram, it has increased considerably since the previous year. 21.9 percent of respondents now say they use this platform at least once a month (2021: 16.0 percent). TikTok usage is highest among 14-to-29 year-olds, at 38.3 percent, well above Snapchat (25.7 percent).