Frankfurt, 16/12/2020. Children’s Internet usage has risen substantially as a result of the coronavirus lockdown and home schooling. According to the 2020-II Platform Study of AGF Videoforschung, the percentage of 3 to 13 year-olds who said they used online content in the last four weeks soared to 76.6 percent, as compared to only 68.0 percent in the preceding 2020-I wave conducted in March and April 2020. “Possible reasons for the sharp rise could be the greater use of entertainment offerings, coupled with home schooling and digital instruction in the midst of the coronavirus pandemic. We are excited to see the results of the next waves because they will show how sustainable this effect is. We also see this effect in the current AGF Panel”, said Kerstin Niederauer-Kopf, Chairperson of the AGF Executive management.

Disney+, among other platforms, seems to have benefitted from the rising Internet usage. This platform’s market launch in Germany coincided with the first coronavirus lockdown. When asked which paid streaming services they have used in the last three months, 1.5 percent of respondents named Disney+ in the 2020-I wave, whereas 7.2 percent named Disney+ in the latest wave. Thus, Disney+ comes in third place, after Netflix with 34.4 percent and Amazon Prime Video with 22.1 percent, and ahead of Dazn with 2.8 percent. Netflix experienced strong growth, increasing by almost 7 percentage points, which translates to a gain of 24.6 percent.

Total video-on-demand usage increased further in the coronavirus-dominated year 2020. Already 42.0 percent said they watched the content of VoD services in the last three months. That is almost 6 percentage points higher than in the spring wave (36.3 percent). “The selection of movies and TV series, as well as sports, is steadily increasing. This kind of service seems to be attracting more viewers from a broader segment of the population”, said Kerstin Niederauer-Kopf.

Working on behalf of AGF Videoforschung GmbH, Kantar surveys the media usage of German-speaking residents aged 14 and up twice a year in the form of computer-aided personal interviews. In this survey, the respondents are not only questioned about the TV sets in their household, but are also asked to show them and turn on certain TV stations. Due to the restrictions imposed to curb the coronavirus pandemic, it was necessary to supplement the otherwise customary in-home field interviews with telephone interviews in the 2020-I wave. The 2020-II wave was conducted in the form of face-to-face interviews, as usual.

A modest increase in overall VoD usage across all age groups can be discerned from the responses to the question of which online video offerings respondents have used in the last four weeks. Usage of streaming services overall rose by 4.2 percentage points to 63.7 percent. YouTube leads the field by a wide margin, with 54.1 percent. Usage of the online services of TV broadcasters was stable at 29.5 percent. 23.1 percent of respondents said they have used the services of public broadcasters. Private broadcasters’ services were used by 7.0 percent of respondents. The slight decrease resulted from the fact that JOYN and TV NOW are now presented separately. JOYN was used by 4.4 percent, TV NOW by 5.0 percent of survey respondents.

The entertainment button (“Red Button”) is becoming more visible in households. To find out how widespread the use of the Red Button, which leads viewers of advertising and programming content to additional information, already is, Kantar checked to see whether indications of such usage appear on the respondents’ TV sets. Whereas 40.8 percent of households made use of this service in the first wave of this year, this percentage has since risen to 42.7 percent.

Wave 2020-I: Computer-aided telephone interviews (CATIs) were additionally conducted by trained, qualified face-to-face interviewers due to the coronavirus pandemic

Sample: Proportional, representative random sample on the basis of the ADM Face-to-Face Sample System / Wave 2020-II: Sample size n=2,451 / Wave 2020-I: Conducted with a reduced sample size of n=1,683 due to the fieldwork pause and longer CATI interviews 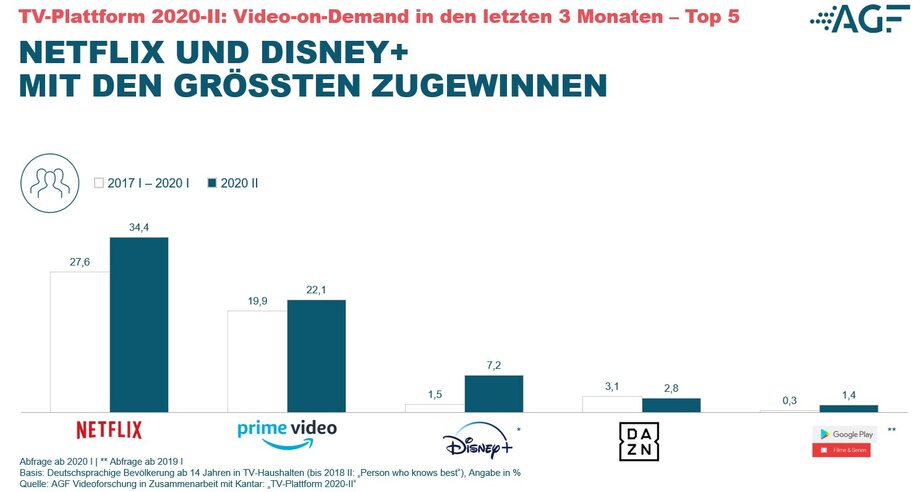