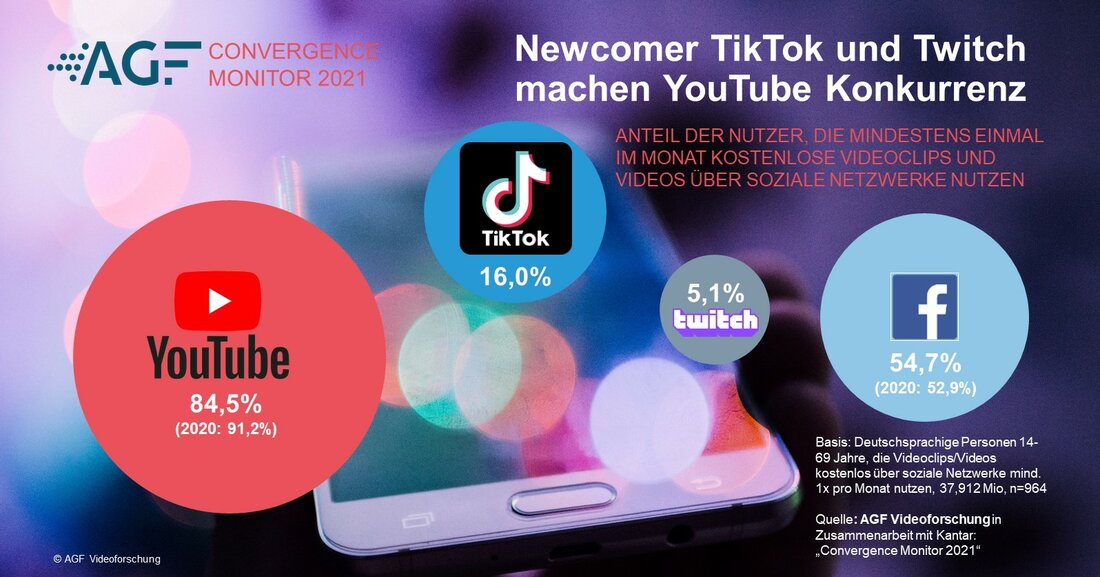 Frankfurt, September 16, 2021. It’s time for entertainment: When Germans access video content on their own terms, which is to say “on demand,” they most often turn to paid Video-on-Demand services for entertainment: At 33.9 percent, series, movies and documentaries clearly lead the field (2020: 30.7 percent). In the meantime, however, sports content usage is also on the rise: 7.2 percent (2020: 4.9) of video users rely on Video-on-Demand services for soccer or Formula 1 racing - think Dazn, Sky, Eurosport Player or Magenta Sport. These are the results of the CONVERGENCE MONITOR 2021, the study conducted again this year by the market research institute Kantar on behalf of AGF Videoforschung. “Given that content drives usage, it will be very interesting to see whether sports viewing in the VoD market can be increased even further,” explains Kerstin Niederauer-Kopf, CEO of AGF Videoforschung.

YouTube falls below the 90-percent mark / Growing usage of TikTok

Like last year, video clips are highly popular (52.6 percent), followed by videos via social networks (44.9 percent). Among users who use free video clips/videos on social networks at least once a week, YouTube takes first place by a wide margin, although the network’s current share of 84.5 percent has fallen well below the 90-percent mark (2020: 91.2 percent). This development likely reflects the strong growth of new competitors: In this, the first time it was tracked in the survey, newcomer TikTok took fifth place with 16.0 percent, while Twitch registered 5.1 percent. Videos on WhatsApp remained steady at 68.6 percent, Facebook at 54.7 percent (up 1.8 percentage points).

The VoD services of conventional TV stations – ARD Mediathek, ZDF Mediathek, TV Now or Joyn – are becoming increasingly popular, having increased to a monthly usage value of 29.9 percent (2020: 28.5 percent). Thus, the popularity of Video-on-Demand services continues to grow: The results of the latest CONVERGENCE MONITOR show an increase of 1.4 percentage points over 2020. In total, 57.2 percent of respondents stated that they have used VoD services at least once already (2020: 54.1 percent). Almost one out of two respondents has already chosen programming content from more than one VoD service. The services of the public-sector broadcasters ARD and ZDF are the best known by far, each with a familiarity value of more than 90 percent. Two thirds of users are familiar with the RTL Group’s TV Now service, while 58 percent are familiar with the later-launched Joyn service of ProSiebenSat.1 and Discovery Deutschland.

Accessed VoD content is increasingly being viewed on TV sets (42.5 percent), whereas the corresponding usage values for PCs and laptops, but also smartphones, have declined slightly.

“The non-linear use of video content is certainly no longer a phenomenon that can be observed only among young target groups; on the contrary, the age structure of VoD users has since become relatively balanced, with characteristic manifestations”, said CEO Kerstin Niederauer-Kopf. For example, the VoD services of private-sector broadcasters tend to be used by a somewhat younger age group, with a peak among 14-to-29 year-olds, whereas viewers of all age groups tend to use the VoD services of the public-sector broadcasters. Netflix still leads the field of paid Video-on-Demand platforms, with 33.9 percent of respondents saying they use the service, followed by Prime Video (26.8 percent), Disney + (7.9 percent), and Sky (4.6 percent). When it comes to sports content, DAZN leads the field (5.0 percent), ahead of Sky (4.3 percent), Eurosport Player (2.2 percent), and Magenta Sport (0.8 percent). Viewers aged 14-to-29 represent the main clientele of Netflix, Amazon Prime, and Disney +, whereas Sky is preferred among viewers aged 30-to-49.

TV sets (94.3 percent) and smartphones (92.2 percent) have been and still are popular among the Germans. Nonetheless, the stable trend of household purchases suggests that these devices are close to reaching the saturation point. Ownership rates correlate strongly with device usage. TV set usage is still dominant, at 93.9 percent, ahead of smartphone usage (91.5 percent). The heightened need for entertainment during the lockdowns is clearly reflected in the increased use of game consoles, which can now be found in one third of all households. Moreover, game consoles are increasingly being connected to TV sets, making them Internet-capable where they were not before. In the meantime, 55.2 percent of all households have TV sets that can be connected to the Internet (2020: 52.0 percent), and this percentage continues to grow. Accordingly, the utilization of Internet services on TV sets, currently at around 36.7 percent, is also increasing. Of this number, 6.7 percent only use HbbTV services that can be activated by pressing the red button on the remote.

The CONVERGENCE MONITOR survey has been conducted by Kantar every year since 2008, making it one of the few long-term studies of media usage in Germany. The study has been conducted under the auspices of AGF Videoforschung (AGF) since 2020. For this year’s study, Kantar interviewed 1,569 persons aged 14 to 69. Whereas only telephone interviews (CATIs) could be conducted in 2020 due to the coronavirus pandemic, face-to-face interviews were conducted this year again (field time: 30/03 to 16/05/2021). The universe comprises the German-speaking residential population, or households with at least one person between 14 and 69 years of age in Germany.