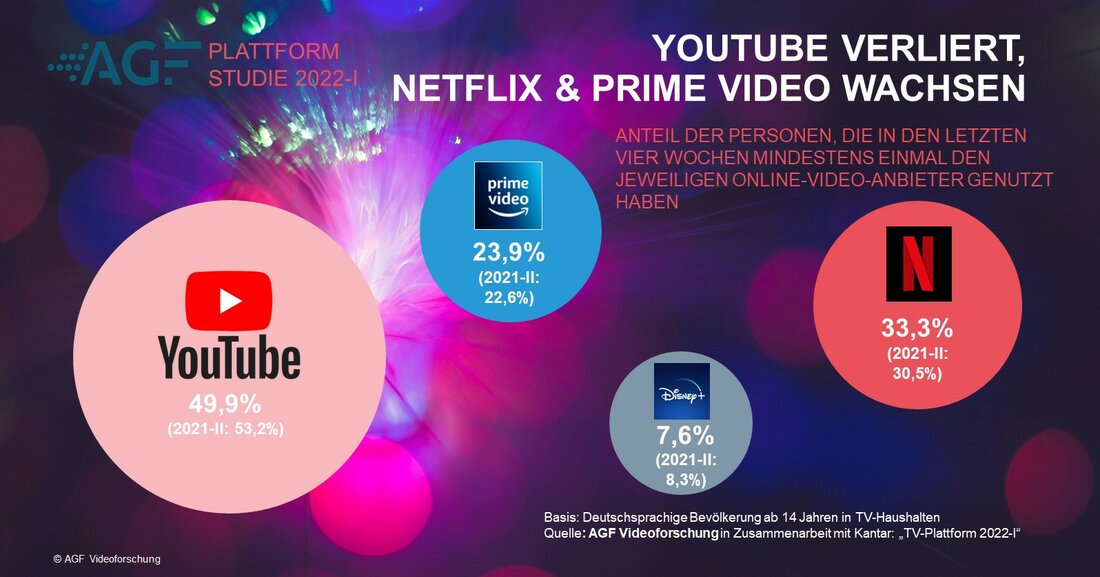 Frankfurt, 07/07/2022. Usage of YouTube has again declined slightly. In the current 2022-I Platform Study, 49.9 percent of respondents aged 14 and up say that they had used the video service within the preceding four weeks, 3.3 percent less than in the 2021-II wave. The decline that started in 2021 has thus continued. In contrast, Netflix, Prime Video, and public broadcaster offerings gained.

The AGF Platform Study is performed twice yearly by Kantar. The case number is relatively high at 2,500 respondents per wave. The institute gathers data not just through personal interviews, but also through home visits, allowing the researchers to gain extensive data on matters such as devices in the home and internet usage. The Platform Study is used to adjust the AGF Videoforschung measurement system. The current wave ran from 14 February to 3 April, thus starting just before the start of the war in Ukraine on 24 February 2022.

By comparison with the preceding 2021-II wave, public broadcaster offerings gained 2.9 percentage points in the last four weeks, to reach 28.1 percent. “One possible interpretation of the rise in viewership of public broadcaster offerings is that the Ukraine war led to increased usage of information programming, as we already saw during the corona lockdown,” says Kerstin Niederauer-Kopf, CEO of AGF Videoforschung in Frankfurt.

The decline in YouTube might be a result of more time spent with other streaming services at the expense of YouTube’s free service. While Netflix and Prime Video also saw declines in the autumn wave, they gained in the spring of 2022. In the preceding four weeks 33.3 percent of respondents watched Netflix ((2021-II: 30.5 percent) and 23.9 watched Prime Video (2021-II: 22.6 percent). Netflix will have benefited from series pilots and continuations like “Inventing Anna”, “Vikings: Valhalla” and the second season of “Bridgerton”. Prime Video, for its part, benefited from Champions League programming, especially matches featuring FC Bayern München. New seasons of successful series like “The Marvellous Mrs. Maisel” and “Star Trek: Picard” also launched during the survey period.

Other reasons for the positive numbers, besides current programming and discounts, could be the weather or the negative corona effect from the preceding 2021-II wave. After the long lockdown, viewership declined in the spring and fall of 2021. Many people seem to have used the end of corona restrictions to do other things with their leisure time than watch video.

On the other hand, Disney+ saw another decline after a strong start in Germany in the spring of 2020. The number of people saying that they have Disney+ sank from 8.3 percent to 7.6 percent in the current wave. “Especially 14 to 29 and 30 to 49 year olds gave Netflix and Prime Video a push, while the decline in Disney+ is mainly attributable to 14 to 29 year olds due to the orientation of the platform towards a young audience,” explains Niederauer-Kopf. On average, respondents have access to 1.4 streaming offerings.

High-resolution TVs in one out of three households

32.7 percent of TV households have a modern television set with Ultra HD, 4K or 8K. This is a definite jump over the 2021-II wave (22.6 percent). But most of this is probably due to a change in the questions. For one thing, 8K was now included in the survey. For another, whereas in the past respondents were asked specifically about the visibility of an “Ultra HD/4K” logo, in this wave they were only asked whether they could see a logo of any kind.

Name of the study:     TV Platform

Methodical adaptation of the TV Platform study: Since Wave 2021-II the Platform Study has been weighted for AGF Video Potentials, which since 01/01/2022 has also served as the external specification for the entire AGF system. In addition to survey data from the Potential Study in cooperation with agof and ag.ma, it also incorporates information from the Platform Study. The Platform Study is performed using a very thorough methodology by which interviewers visit respondent households, thus gaining precise data on which pay TV and streaming services are used.