2021 findings: Video usage influenced by coronavirus / Increased streaming use in all age groups 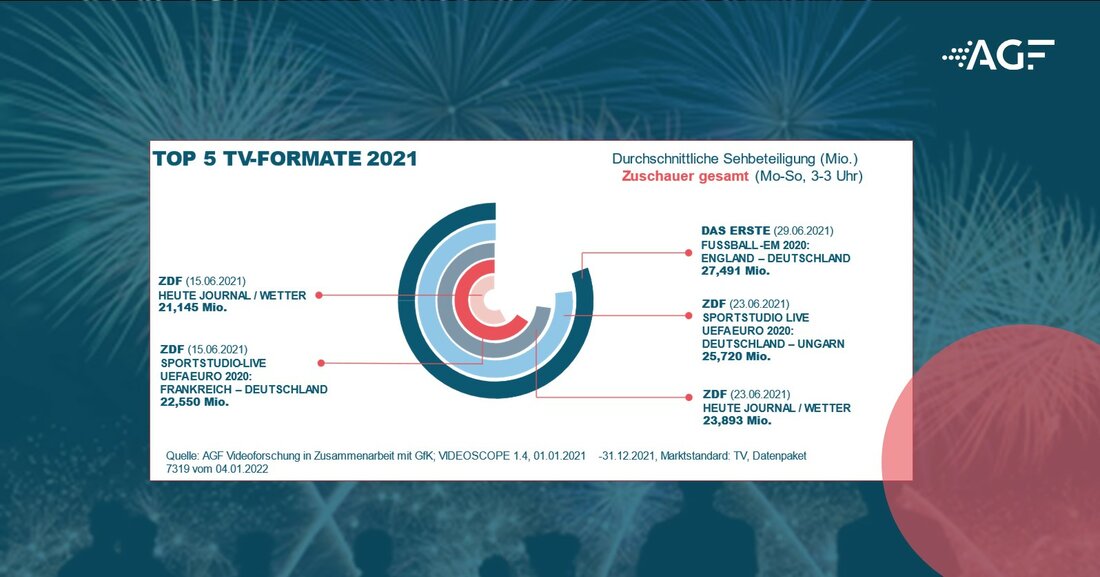 Frankfurt, 05/01/2022. Coronavirus, soccer, parliamentary elections: The dominant topics of 2021 also dictated video usage. Sports were the main driver of TV usage. Both the Olympic Games and the UEFA EURO 2020 were held in 2021 after a one-year delay. In total, 62.188 million or 82.6 percent of all TV viewers watched at least one European Soccer Championship broadcast for at least one minute. “King Soccer has underscored its claim to leadership once again. Live sports excite audiences like no other genre”, said Kerstin Niederauer-Kopf, CEO of AGF. “It now appears that this success is also being replicated in the streaming world”, she added with reference to services such as Prime Video and DAZN, which procured top-shelf sports broadcasting rights.

Accordingly, the list of the most successful TV broadcasts in 2021 was dominated by the matches of the UEFA EURO 2020. The most successful TV broadcast for the overall audience (minimum broadcast duration: 5 minutes) was the Round of 16 match shown on the channel Das Erste on 29/06/2021, watched by 27.491 million viewers aged 3 and older, when Germany was eliminated by England by a score of 0:2. This translates to a market share of 76.3 percent. Moreover, the Germany matches in the group phases on the channel ZDF against Hungary on 23/06/2021 and against France on 15/06/2021, with 25.720 million and 22.550 million viewers, respectively, were among the top 5 broadcasts. These soccer matches also lifted “heute journal” and “Wetter”, which aired on ZDF in the halftime periods.

The same pattern can be observed among 14-to-49 year-olds: In this target group, the Round of 16 match reached 10.350 million viewers, for an impressive market share of 84.3 percent, followed by the “Germany vs. Hungary” match on 23/06/2021 and the “heute journal”/”Wetter” shows aired in the halftime breaks, which reached 10.243 million and 9.513 million viewers, respectively.

Looking at broadcasts without a sports or news context, “Wetten, dass…?” on ZDF was last year’s most successful TV show. Among viewers aged 3 and older, the show revival on ZDF with Thomas Gottschalk and Michelle Hunziker achieved a viewing participation of 14.462 million viewers and a market share of 45.9 percent. Among 14-to-49 year-olds, the show reached 4.636 million viewers, meaning that one out of every two persons who watched TV on this evening chose the ZDF show (market share: 50.1 percent). Among 14-to-29 year-olds, the market share was an impressive 55.8 percent.

“TV Total” on ProSieben was another successful show revival among the younger target group of 14-to-49 year-olds: After “Wetten, dass…?” and the “Eurovision Song Contest 2021” on Das Erste, the first show moderated by Sebastian Pufpaff on 10/11/2021 was the third most successful show in the “Shows/Entertainment” genre, with 2.244 million viewers aged 14 to 49 and a 27.8 percent market share.

Strong interest in news thanks to parliamentary elections and coronavirus pandemic

2021 was a big year not only for sports, but also for politics. The news was dominated by the coronavirus pandemic and the German parliamentary elections. This is also reflected by the still high share of video usage devoted to news programs, which increased slightly to 36.1 percent of the overall audience. In a year dominated by the European Soccer Championship and the Summer Olympics, sports viewership also rose sharply, as could be expected. The audience share for sports programs rose from 4.4 percent in 2020 to 6.4 percent in 2021, the audience shares of other genres declining accordingly.

About 76 percent of viewers 14 and older sought information about the “Parliamentary Elections” either in linear TV or via streaming. This translates to more than 53 million persons who had contact with a news program at least once for at least one minute in the time up to 30 September.

As in 2020 already, there was a close correlation between coronavirus pandemic measures and both TV and streaming usage in 2021. Especially in the early months of the year, the protracted restrictions on social life led to a high level of TV usage above the medium-term trend. TV usage normalized again as everyday life returned to normal in the spring and summer, as viewers took advantage of the opportunity to patronize restaurants and cultural institutions or travel again after months of abstinence. In some cases, in fact, TV usage came out below the expected trend, pointing to pent-up demand effects in the population. These negative coronavirus effects could also be observed in streaming usage.

For the full year, significant differences in TV usage can be observed in the individual age groups: Whereas the daily average viewing duration among 14-to-49 year-olds declined by 11.9 percent from the exceptional, pandemic-dominated year 2020 to an average of 121 minutes per day in 2021, the same metric among adults over 50 came to 336 minutes in 2021, that being slightly higher than the high level observed in 2020, when the daily average viewing duration had soared to 335 minutes. The total viewing time of viewers aged 3 and older fell by 7 minutes to 213 minutes, modestly higher than the level of the pre-coronavirus year 2019 (211 minutes).

“Also in 2021, we found a correlation between the trend of viewing times and the coronavirus pandemic lockdowns and easings. Viewing times declined in the easing periods, especially in the younger, more active target groups, who are more inclined to pursue alternative leisure time activities”, said Kerstin Niederauer-Kopf.

“We observed the same correlation between the easing of coronavirus restrictions and lower streaming usage. Here too, this trend is considerably more evident among the younger target groups”, Niederauer-Kopf said with respect to so-called unmatched viewing, which describes the share of big-screen usage that cannot be ascribed to linear video services, such as platform usage, for example.

Generally speaking, however, streaming usage continues to grow, especially among younger audiences. Among 14-to-49 year-olds, the average viewing time of the TV broadcasters’ streaming services subject to AGF measurement in 2021 was about 4.5 minutes per day, that being 31 percent higher than in 2020. The total average daily viewing time for the overall audience was slightly less than 4 minutes, indicative of a 24 percent increase from the previous year.

Among the younger target group, the shows “Die Toten von Marnow (Teil 1-4)” on Das Erste took the top spot, followed by the three episodes of “Ku’damm 63” and “Wetten, dass…?”.

In the streaming charts, AGF tracks the broadcasts of all publishers whose services participate actively in the AGF measurement system. These are primarily the services of the TV broadcasters. The values of the streaming charts are subject to change given that the final data includes usage within a period of 60 days after the initial broadcast.

The universe for the TV Market Standard in AGF’s analysis systems is the residential population in the Federal Republic of Germany aged 3 and older in private households with at least one TV set in use and a German-speaking main income earner. In the Video Market Standard, the universe is extended to include all households that have only one internet-capable device in the household with which they can consume video content. Additional information about AGF’s methodology and measurement techniques can be found at agf.de.